BLOG: ADDING VALUE TO COMMUNITIES… FOR YEARS TO COME 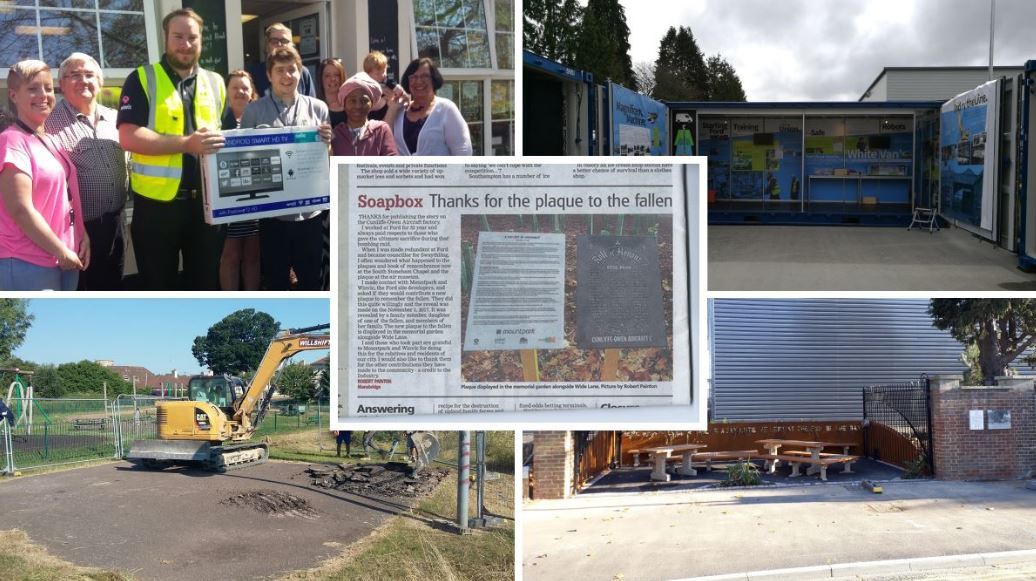 Often I don’t think Project Managers like myself spend enough time reflecting on our achievements, and if we do it tends to be the engineering challenges, complex logistics or the sheer size of the scheme that sticks in your mind. However, I will be thinking about the project I handed over at the end of 2018 – the second Phase of Mountpark Southampton – for a long time to come, and it is the Community Engagement activity that Mountpark, my team and I are exceptionally proud of.

Mountpark Southampton Phase 2 comprises four, BREEAM Outstanding distribution warehouses, totalling 341,000 sq.ft. It’s unusual for an industrial project team to need to engage with a large number of local residents and businesses because such schemes aren’t usually in urban areas; community engagement may also be perceived by some as a process that happens mainly in the planning and design stages. However, the Mountpark Southampton site is at the heart of a community, rich with heritage, and we aspired to add value during the build, and for many years after, with a tailored approach. Our communication about the works programme was crucial, through regular newsletters for example, but it is the sheer breadth of other activity and respect for the local context that makes this project special to me.

Mountpark and Winvic decided to take charge of the abandoned football pitch that was suffering from subsidence and a dangerous basketball court – neither facilities could be used and alternatives in the area were lacking for children and young people. We completely re-levelled the pitch sowed new grass seeds, and the court’s tarmac was dug up and replaced. The community and professional teams can once again make use of the sports amenities, when the grass has grown anyway!

This charity desperately needed to replace dilapidated premises to continue offering wood working skills to local people. The classes and meetings were really important to some people in the community and provided a safe space where they connect to others. Winvic offered to undertake the groundworks on an area behind the railway station, we donated and installed a large shed, and made the surrounding area and path look spick-and-span.

Adding to the Ford Transition Project

The Mountpark Southampton site is rich in heritage due to its former uses, which was integral to Winvic and Mountpark’s sensitive approach. Ford Transit Vans were manufactured here previously and also, during WWII, Spitfires. Unfortunately, the Ford plant closure hit local families hard but the prosperous times were remembered fondly. Now Heritage CIC created a wonderful community project to celebrate the Ford years and, in April 2018, over 1,200 people were welcomed into a pop-up museum on site about the site’s history and future. While plans for the museum were mostly in place when we started on site, I still asked how we could help. We learned the museum experience could be enhanced with films showing the old plant, so Winvic purchased four televisions for the museum and provided the electrical installation for the specially designed unit.

After the televisions were no longer needed at the museum, Now Heritage CIC and Winvic agreed they should next go to good use in the community. We had already forged relationships with ‘Roundabout’, a popular local not-for-profit café, as it was a hub where we could reach out to members of the community. As a thank you for their support, we fitted one of the televisions in the premises and the three remaining televisions were given to a community development officer to be donated to community projects or families in need.

As a company, we’re dedicated to training, safety and shining a light on the roles that in industry affords, so as part of this we offer to visit schools local to any site. Staff from Winvic and Mountpark gave talks to local primary school children about the dangers of playing on construction sites and at three secondary schools about construction career opportunities. Civil engineering students from the University of Southampton were also invited to Mountpark Southampton, to obtain information for an H&S assignment that required the future engineers to visit a live site and report back on procedures.

Winvic supported Mountpark’s S106 agreement beyond requirements, engaging a local artist and Now Heritage, and an interactive space was created for the community. It has a seating area, with one table comprising a chess board and another the signatures of local people who worked at Ford. Wind-up speakers play audio from the pop-up museum, steel public art features the words “THERE WE ENTERED AND TOILED AWAY UNTIL WE LEFT AT THE END OF THE DAY” and the area is flanked by the old Ford factory gates. A plaque to commemorate those who died on the site during WWII bombing was also mounted.

Winvic and Mountpark have proved that perceptions about the construction industry can be changed, and we have received numerous positive comments that illustrate this.

“I would like to thank [Winvic and Mountpark] for the… contributions they have made to the community – a credit to the industry.”
Robert Painton, resident

“This was an excellent example of partnership working. The [Pathways to Employment] activities… have made a real difference to local people.”
Denise Edghill, Southampton City Council

Glowing testimonials such as these, the site’s nomination for a CCS Award 2019 and a CCS score of 46 illustrate that our actions were significant, successful and applauded. I am proud that our activities show what true considerate construction can look like and illustrate how participatory best practice can fortify awareness, generate positivity and connect people through geography and heritage. A project many people won’t forget in a hurry.