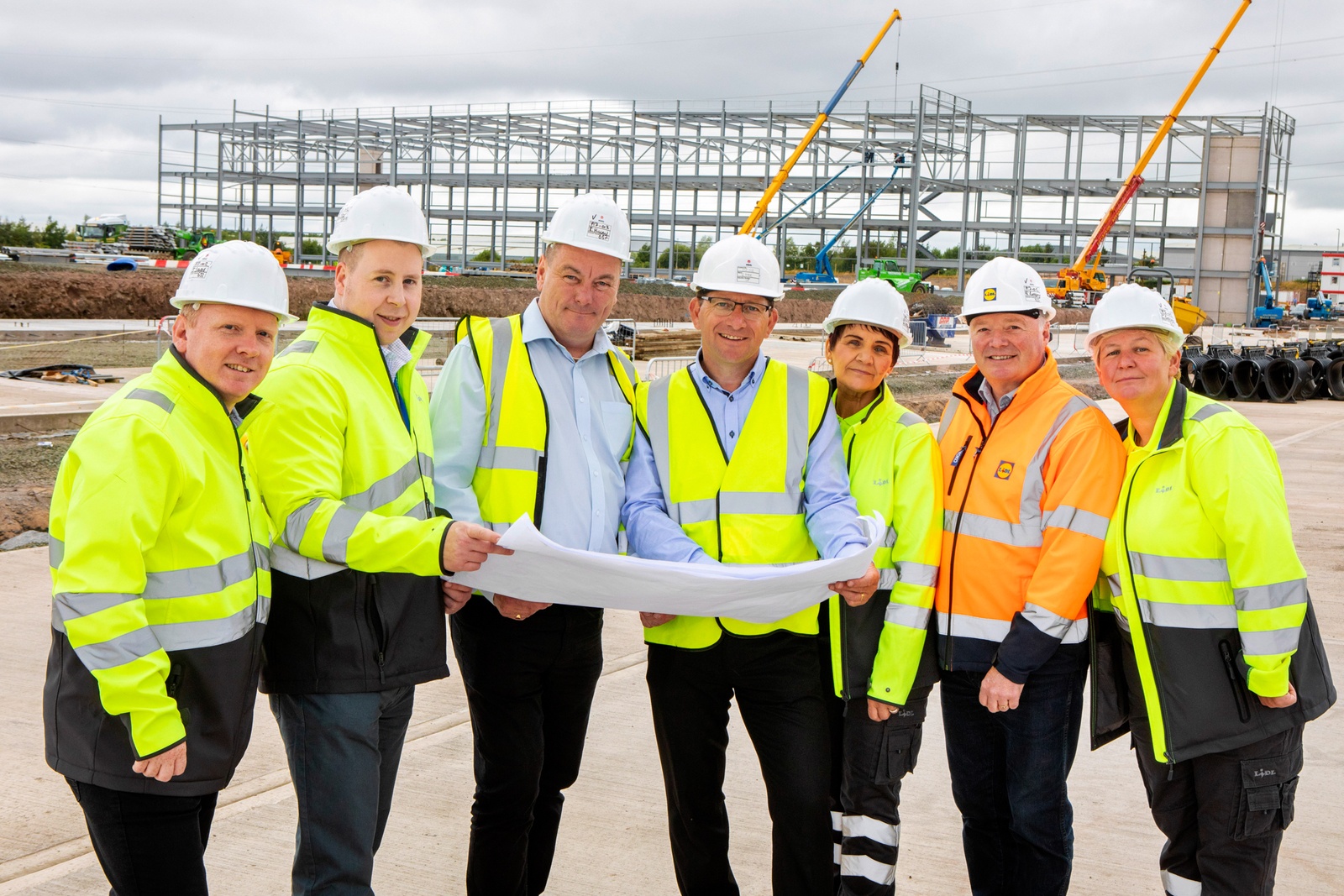 The first stage of steel frame construction is underway at Lidl UK’s new Scottish RDC at EuroCentral, which will be the company’s largest in Britain.

The retailer took three members of its warehouse team, who collectively hold 60 years’ service at the company, along to the site to share progress and discuss business developments with senior management members. 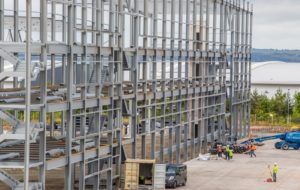 The steel frame will take 12 weeks to erect overall, and is expected to comprise of 4,000 tonne of steel, which is over five times the steel used in construction of The Kelpies. The site, measuring a total of 209,900 square metres, could fit 29 Hampden Park football pitches on it.

The team from Winvic Construction Ltd, the firm tasked with building the RDC, will complete the job in time for winter 2019, when the distribution centre is expected to welcome Jason Sandie, Denise Farquar, Carol Barclay and their 400 Lidl colleagues, who will relocate from the current Livingston warehouse, which first opened in 1996.

“We are delighted to be working with Lidl again to build its largest regional distribution warehouse in Britain, illustrating how Winvic and its team members are seasoned in building client relationships and delivering first class schemes time and again.”

Jason Sandie, Team Manager Goods In, said of seeing the new site for the first time: “I’ve been with Lidl in Scotland for over 20 years, first working in stores and then moving to the warehouse. In that time we have expanded from serving 20 Scottish stores to 95, and the extra space in the new RDC will be very much welcomed. I’m really looking forward to it, and it’s very exciting to see the scale and working areas in the new building.”

Ross Millar, Lidl UK’s Managing Director for Scotland, said: “There’s lots of work ahead but we’re all very excited about the new Distribution Centre. The facility will help us make sure that Lidl stores across the country can continue to serve the increasing demand from our customers. It’s great to see the building begin to take form, which is down to the hard work of many people across the business. We’re all very much looking forward to moving into this high spec facilitynext year.”

Neil Bannerman, Operations Manager for Winvic, added: “We are delighted to be working with Lidl again to build its largest regional distribution warehouse in Britain, illustrating how Winvic and its team members are seasoned in building client relationships and delivering first class schemes time and again. Construction of the new 209,900 square metre RDC is progressing well and we are looking forward to facilitating the move from Lidl’s existing facility at Livingston next year.”

The relocation forms part of the supermarket’s commitment to invest £1.45bn in Great Britain across 2017-18 and will create up to 360 new jobs. Lidl’s success continues, with the latest Kantar Worldpanel results* showing continued sales growth of 9.7% and a market share high of 5.4%.