Posted on May 30, 2019 in Considerate Constructors Scheme 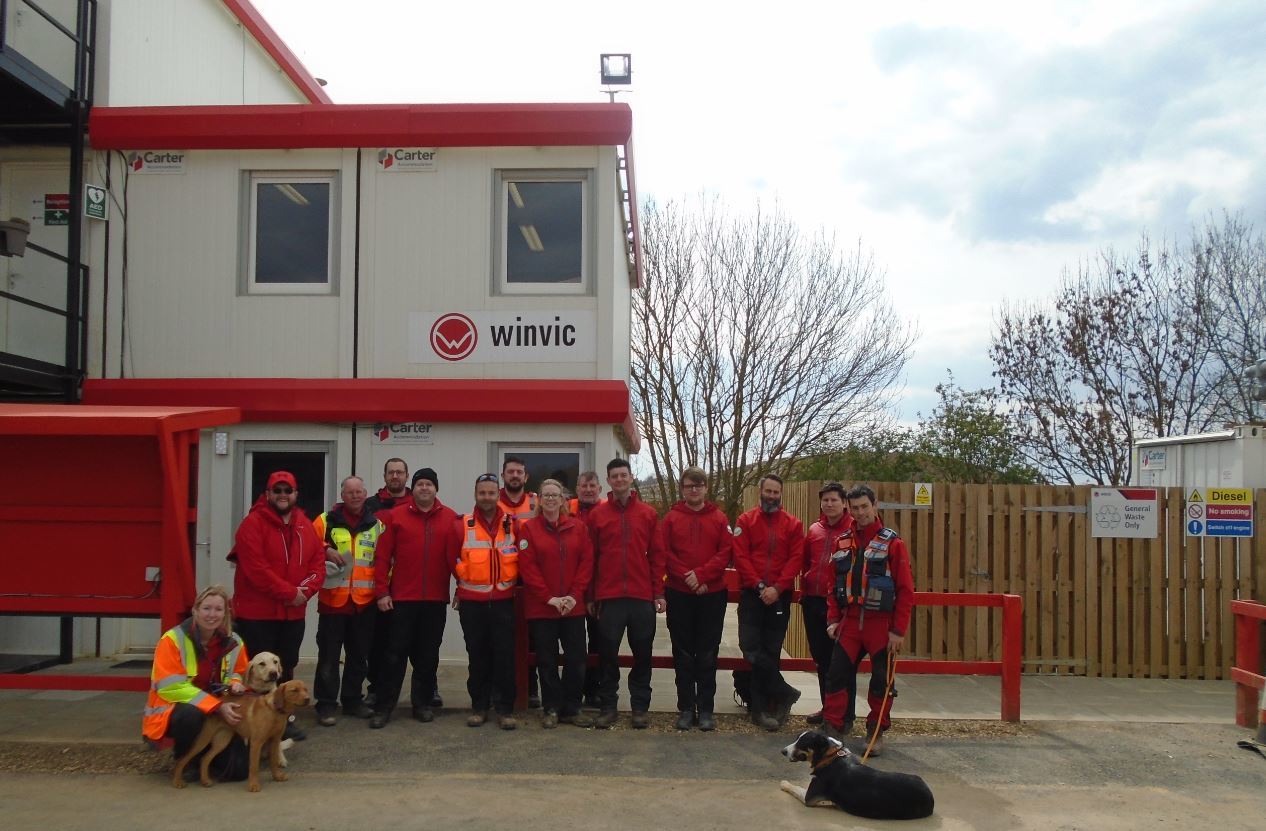 Our Warth Park, Raunds site was recently host to 14 members of the Northamptonshire Search and Rescue (NSAR) team who conducted a search and rescue training operation on the site which offered a range of potential rescue scenarios for NSAR to explore. Winvic’s project team ensured NSAR had full use of the site by allowing access on Sunday 14th April when the site would be non-operational. The project is the sixth to be delivered by Winvic at Warth Park for client Roxhill and consists of earthworks and new infrastructure, including road development, street lighting, drainage, a country park extension, a 15m span bridge to facilitate an existing road and the construction of two industrial units; Plot 6A which will be 665,520 sq ft and 308,210 sq ft.

Alongside the members of NSAR at Warth Park were three dogs, one command centre and one ambulance. The day started with two injured persons being hidden on the 3 million sq ft site, after a thorough briefing carried out by NSAR, they co-ordinated themselves into search grids and carried out a methodical search of the area using the dogs and other search and rescue equipment, Gareth Williams from NSAR recalled:

“The training exercise was something very special and unique. We normally train in the woods and fields, and sometimes in urban environments, so to have the chance to have access to a large-scale building site was completely new to us.

“It presented some unique challenges which we hadn’t seen before and allowed us to test and try out new methods of working. For example, our dogs are trained to work off a route and search from a path. There were no paths on the site, or markings on the mapping so we had to improvise, adapt and overcome. Similarly, our dynamic risk assessments were tested, to account for the trenches, and semi complete works we found around us, something we don’t typically have.”

The exercise proved hugely successful, with two missing persons located in under 45 mins, one by the on foot team, and one by the dog team, both treated by the team medics in what the team described as a challenging environment, and extracted by a land rover.

The Winvic site team strongly felt the desire to support the local community and specifically went out of their way to make contact with NSAR, Derren McCrum Site Manager stated, “None of us know when we will need to ask for help in finding someone that has gone missing and so giving the local search and rescue team the chance to train for such an event is a simple way of giving back to the local community.”

“Hopefully no one will ever need to call on NSAR’s services, but you can rest assured that if they did they would be working as hard as possible to reunite you.  The event itself was conducted with total professionalism and the way NSAR communicated as small teams and as a whole was outstanding to watch.  Everyone knew what the other teams were doing and seeing the dogs look so happy whilst working was the highlight of the day for me, you would not know that they were carrying out such an important task, the ground they cover is far more than a single volunteer would be able to cover.”’

Overall the day was a huge success and very much appreciated by both NSAR who felt the exercise “could help us save a life one day” and Winvic who were keen to support the local community where they are building on behalf of client Roxhill.