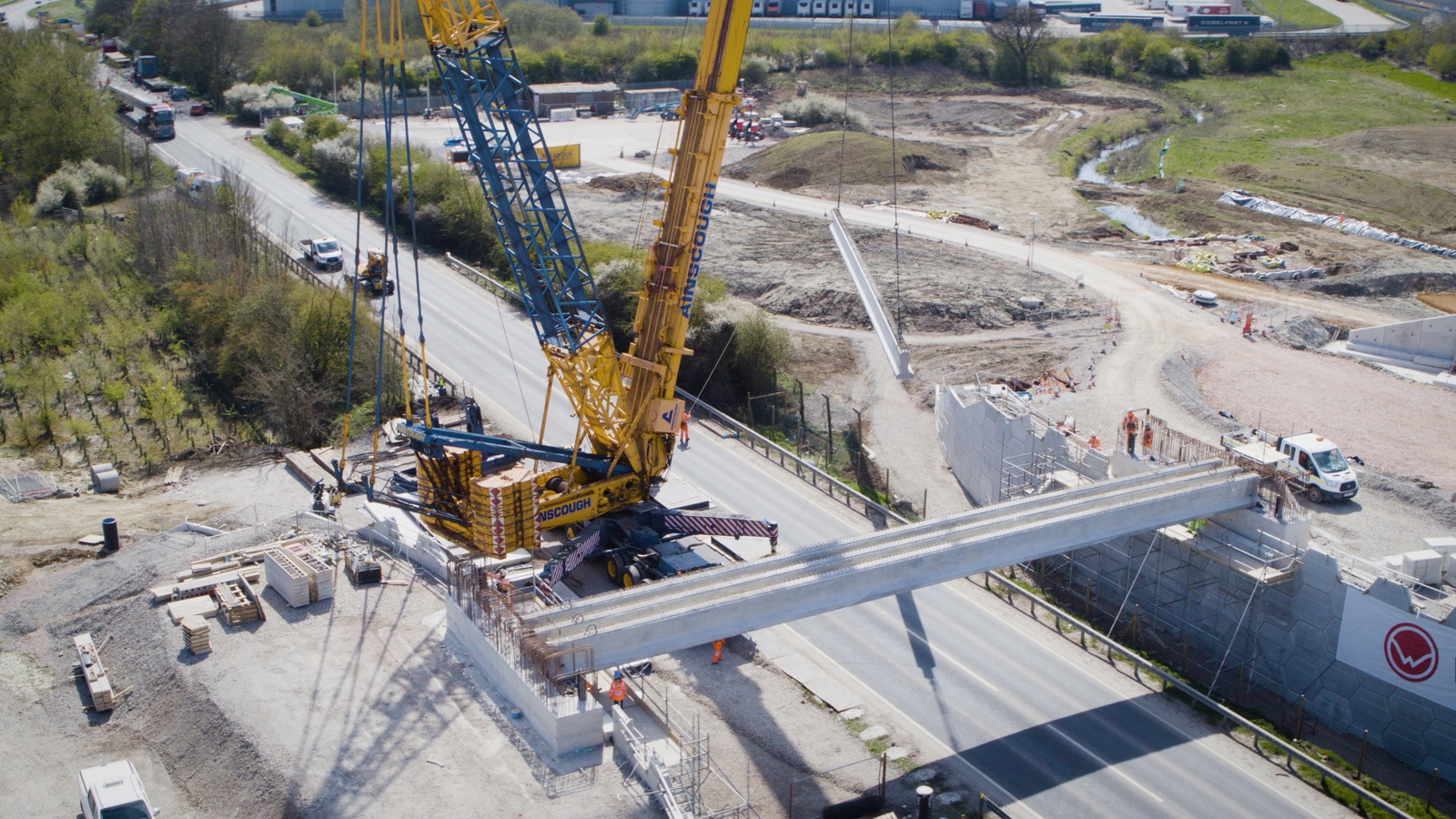 On Saturday, 17 April, Winvic Construction successfully lifted eight railway bridge beams into place over the A5 – 2km north of M1 J18. It is one of three bridges that Winvic is constructing for Prologis at DIRFT III in Northamptonshire, as part of a £29 million contract to deliver a new state-of-the art Intermodal Rail Freight Terminal.

The A5 railway link bridge that will carry two tracks has an effective span of 30m over the highway and is a fully integral, single-span, prestressed concrete structure. The line will be networked to the existing DIRFT terminal and the West Coast Mainline at one end and the new Intermodal Rail Freight Terminal at the other. The terminal will comprise a five-track, 800m long siding with a rail traverser and a 79,000m2 concrete terminal slab. The facility will be capable of receiving up to 24, 775m long trains each day.

The concrete beams were lifted into place on to the reinforced soil abutments and wing walls during a single day under a 43-hour road closure. A 50m tall Liebherr LTM 11000D crane arrived on site on Friday evening and was rigged on the usually busy trunk road in under ten hours. The first internal beam was sailed and bolted into place at approximately 10.30am and the eighth and final edge beam was installed at 8:30pm, followed by the edge protection works. Multiple GRP (Glassfibre Reinforced Plastic) permanent formwork panels were also installed to the bridge deck throughout the day by the Winvic team. On Sunday morning, the crane was demobilised and traffic management removed, then the road was reopened on schedule at 3:30pm.

While safety is always a priority for Winvic – a firm which has an enviable HSEQ track record and a comprehensive safety initiative called  ‘Doing It Right’ – such a complex activity required a vast amount of engagement with the safety team. Extensive planning, risk assessing, coordination and collaboration took place months in advance between a wide number of Winvic staff, subcontractors and stakeholders, such as Highways England. Regular programme reviews, on-the-day monitoring and Winvic’s one team approach ensured the 440 tonnes of concrete beams were installed safely. 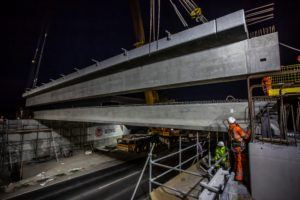 The project started in June 2020, with earthwork re-engineering of the plateau, and the scheme will be completed in summer 2021.

Rob Cook, Winvic’s Director of Civils and Infrastructure, commented: “Every project has its challenges but as you can imagine there has been years of planning, design and hard work to get to where we were this weekend, seeing the country’s newest railway bridge come to life. It has been the whole team’s skills and impeccable partnership work with Prologis and Highways England that have made the journey to this point a smooth one. I couldn’t be more proud of them for reaching this key project milestone at DIRFT III, and that they executed the very complex beam lift without any hitches, to schedule and – most importantly – safely. It has been an exciting and impressive thing to watch, but now our focus is primarily on the other two bridges and the rail track installation, and we look forward to completion this summer.”