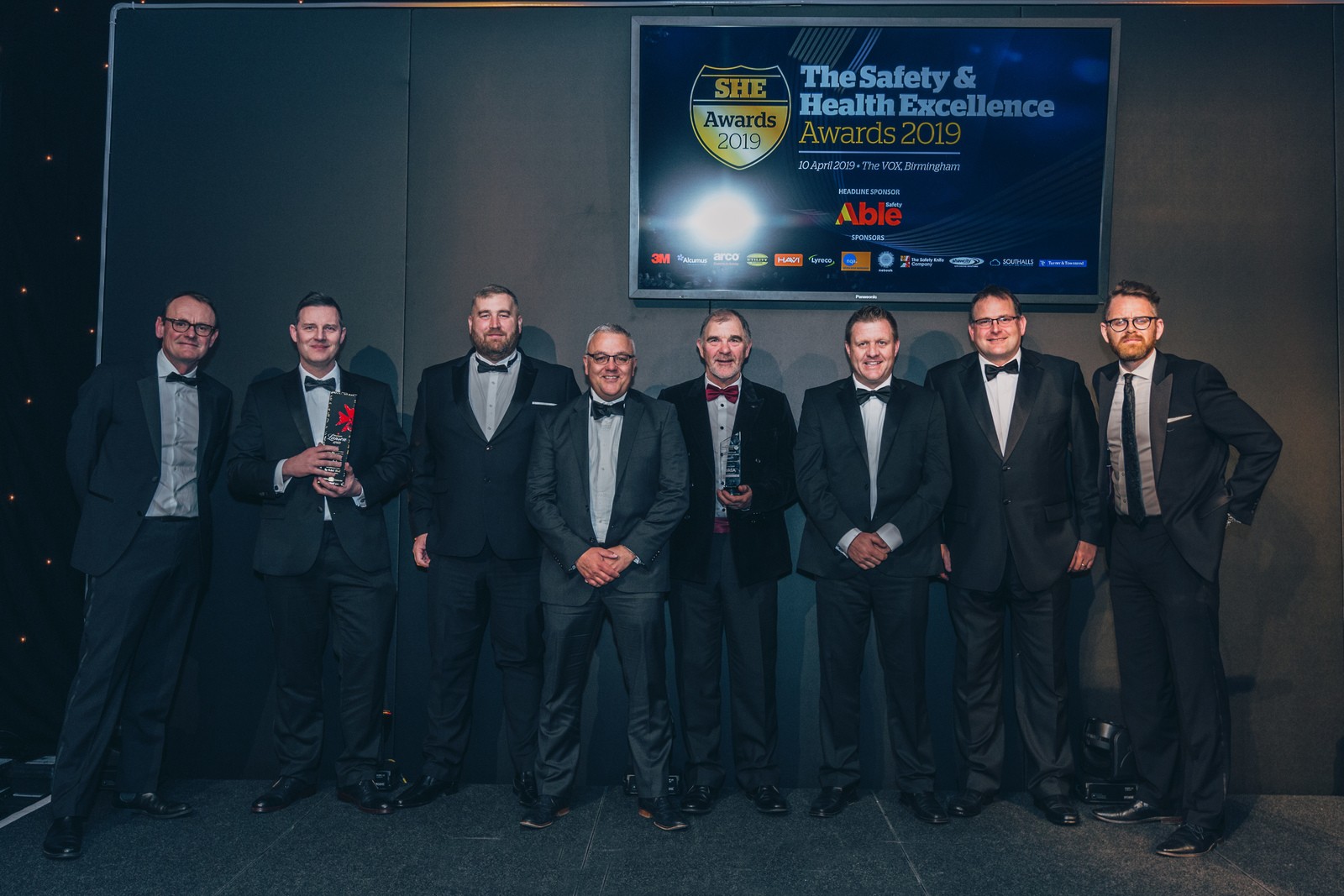 Winvic Construction Ltd, a leading main contractor specialising in turnkey solutions for industrial, build-to-rent, student accommodation and commercial projects, were announced as Best Health and Safety in Construction at the Safety and Health Excellence Awards on 10 April 2019. A team of Winvic’s project staff and HSEQ employees collected the award, which was presented by comedian Sean Lock and Gareth Poole from the category sponsor, Turner and Townsend.

The category was new for 2019 and aimed to recognise a construction project that has an exemplary health and safety record. Phase 2 – covering the civils and infrastructure elements of the 700 acre development, SEGRO Logistic Park East Midlands Gateway (SLPEMG), proved to be just that.

Adrian Bracken, Senior HSEQ Manager at Winvic who is located full-time at the SLPEMG site, said: “While we do what we do to ultimately make people’s lives safer and healthier, it’s a great feeling to be recognised for our work. It was, and continues to be, a team effort between Winvic, SEGRO, suppliers, third-party stakeholders and local communities, but we really have achieved a one-team approach to looking out for each other, regardless of employer or the job at hand. We take an inclusive approach to subcontractor training and just do the right thing, regardless of industry patterns. That’s the Winvic Way.”

Mark Skelton, Project Manager on the infrastructure and rail phases of SLPEMG, added: “We took a fresh approach to health, safety and wellbeing on this giant project, and having Adrian working as a dedicated, on-site HSEQ resource has allowed us to take care and welfare to the next level. Whether it’s a daily interface with Highways England to mitigate risks, utilising an innovative double central reserve crash barrier as a first in the UK or arranging daily transport for a local partially sighted lady when a cycleway was closed, we take an inclusive approach and are result focussed. I’m very proud of my team and am looking forward to completing the project later in the year.”

Kate Bedson, Senior Development Director for National Logistics at SEGRO, said: “Health and Safety is a high priority for SEGRO and it’s great to see Winvic being recognised for this achievement.”

In October 2018, the civils and infrastructure works were completed:

By the end of September, Winvic will have completed construction of almost 3 million sq ft of modern warehousing plus office space, across four plots:

The Strategic Rail Freight Interchange and associated railway works will be complete in September 2019:

Winvic has also been shortlisted in two CN Award categories – Contractor of the Year and Safety and Wellbeing Excellence Project for SEGRO Logistics Park East Midlands Gateway (SLPEMG) – the winners will be announced in the summer.