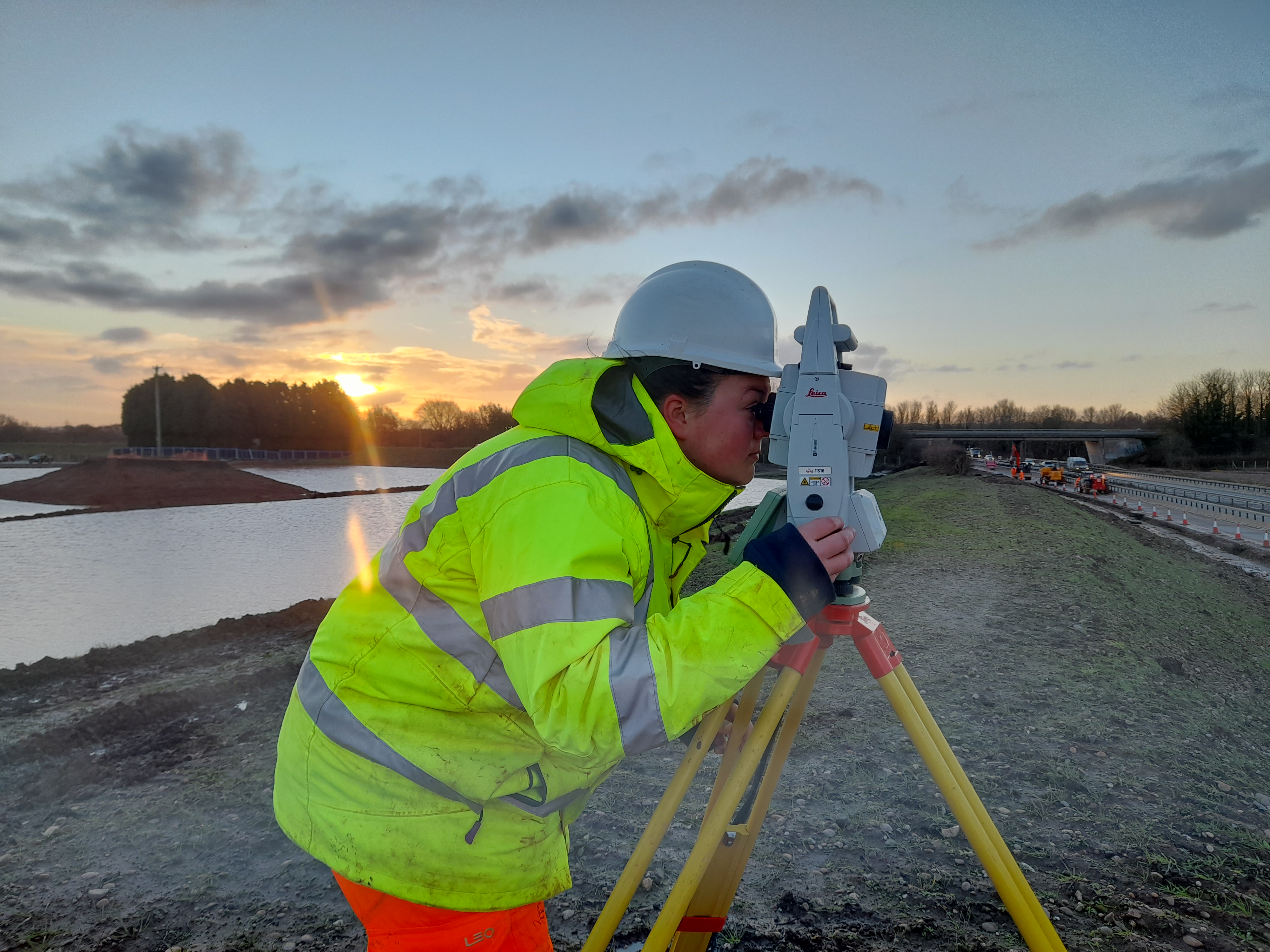 As we get towards the end of National Apprenticeship Week 2022, we’re bringing you the second blog in our series where we’ve asked some of our trainees to tell us about their experience, if you missed the first, catch up with Elliot’s advice here.

Maddie is 20 years old and has been part of our team for just less than six months, working as a trainee site engineer and studying for a Level 4 HNC Site Engineering Technician qualification. However, Winvic featured much earlier in her career journey, as she explains…

Did you always want to work in construction?

“No, not at all, but my dad is a project manager at Winvic, so I’ve had years of listening to construction talk around the dinner table! It all must have gone in somehow! When I finished school, I wanted to be a physiotherapist and I started a sports course at Derby College, but it turned out that it wasn’t for me, and I didn’t want to go back after my first year. My Dad arranged for me to go on three weeks work experience at a site at Castle Donington where I got to follow different people to understand how a project and different roles works. But I enjoyed the engineering side so much I ended up spending a lot of time with that team.”

Is that when you decided to go down the apprenticeship route?

“Yes, but I didn’t start one immediately. As I started to think that I could potentially become a site engineer, I spoke to lots of people about how they got to where they are. The people who I shadowed could see that when they taught me something by showing me, rather than just verbal instructions, that I picked it up more easily. They suggested an apprenticeship route could be right for me, but it would be better if I first got some base knowledge and more site experience, then specialise as an engineering apprentice. So, I studied for Construction and the Built Environment Level 3, for two years, and within that time did work experience at two or three other companies. Being able to compare my time on a Winvic site to other contractors’ projects, none stood out as much as Winvic. I really wanted to get an apprenticeship here… and obviously I did. I love the practical side and now I’m on-site almost every day I can’t stand the thought of ever being full time in the classroom again.”

You started with us in August, what have you been doing so far?

“In my first couple of weeks, I visited the Peddimore, Mercia Park and DIRFT III schemes, and was health and safety trained. I then spent a month at IM Properties’ Mercia Park, three months at Peddimore and since Christmas I’ve been back at Mercia Park where we’re constructing five buildings – totalling 3 million square feet – for Jaguar Land Rover. Getting involved with a civils and infrastructure project, a vertical industrial build and an Intermodal Rail Freight Terminal has been great, and so far, I think I can see myself focusing on warehouse and distribution facilities. There’s something about the size and space I enjoy.”

Can you give an example of something you’ve learned on site?

“I can think of something when I was working at the 71-hectare Peddimore site, which taught me that learning can come from getting it wrong sometimes! Winvic is delivering the first phase of a significant infrastructure project – including earthworks, utility installation and a new roundabout on the A38 – and I was tasked with checking the foul drainage installation had been installed at 5 metres below ground level. The tricky things to contend with was – it was on a hill, the continuous gradient was 57 metres in length and I’d never used the engineers level before! Of course, I wasn’t just left to it and Aimee  a site engineer, showed me the equipment in the office and taught me the mathematics. I did the job but when Aimee looked at the numbers, she immediately could tell it wasn’t right and gave me a couple of clues. I couldn’t figure it out at first, but I went back to my notes, thought about it and I got it right. I was proud of myself and so was Aimee, and I knew she wouldn’t have minded if she had to go over the whole process again. Everyone is so welcoming and supportive, they just want to help you to get better and better.”

Would you recommend an apprenticeship?

“Yes definitely, although I suppose it depends on what job you’re aiming for! If it’s with your hands or relating to practical work, like construction engineering, then it seems the best way to learn quickly and correctly to me. What’s been great, even though I’ve only been here five or six months, is that as I’ve proved that I can complete a task right, that I always work safely and that I’m thinking ahead I’ve been given extra responsibilities. So, at the moment I’m working on the pour of the internal concrete floor in one of the Jaguar Land Rover units. At first, I went round with someone, watching, learning and asking questions, then they watched me and asked me questions. Now I check the level of the base before the mix is poured, and again afterwards on my own and I’m very confident doing it. If I find anything that isn’t up to standard or have a query, I flag it to Neil, the senior site engineer, and work with the subcontractor to ensure any corrections are made if they are needed.

“Basically, this hands-on apprenticeship offers me the chance to learn much quicker than I would full-time at college or uni, and I get to also learn things I don’t think you really can in the classroom. Like being part of a team, understanding how one seemingly small thing can affect the programme and how to communicate to so many different types of people. And if I get stuck on any college work, there’s always someone to answer my questions. I think it’s important to find the right company for you though, and maybe don’t just jump at the first apprenticeship placement offer. You’re working four days out of five, so you’ve got to enjoy your surroundings, team and feel supported.”