Posted on August 2, 2022 in Civils & Infrastructure 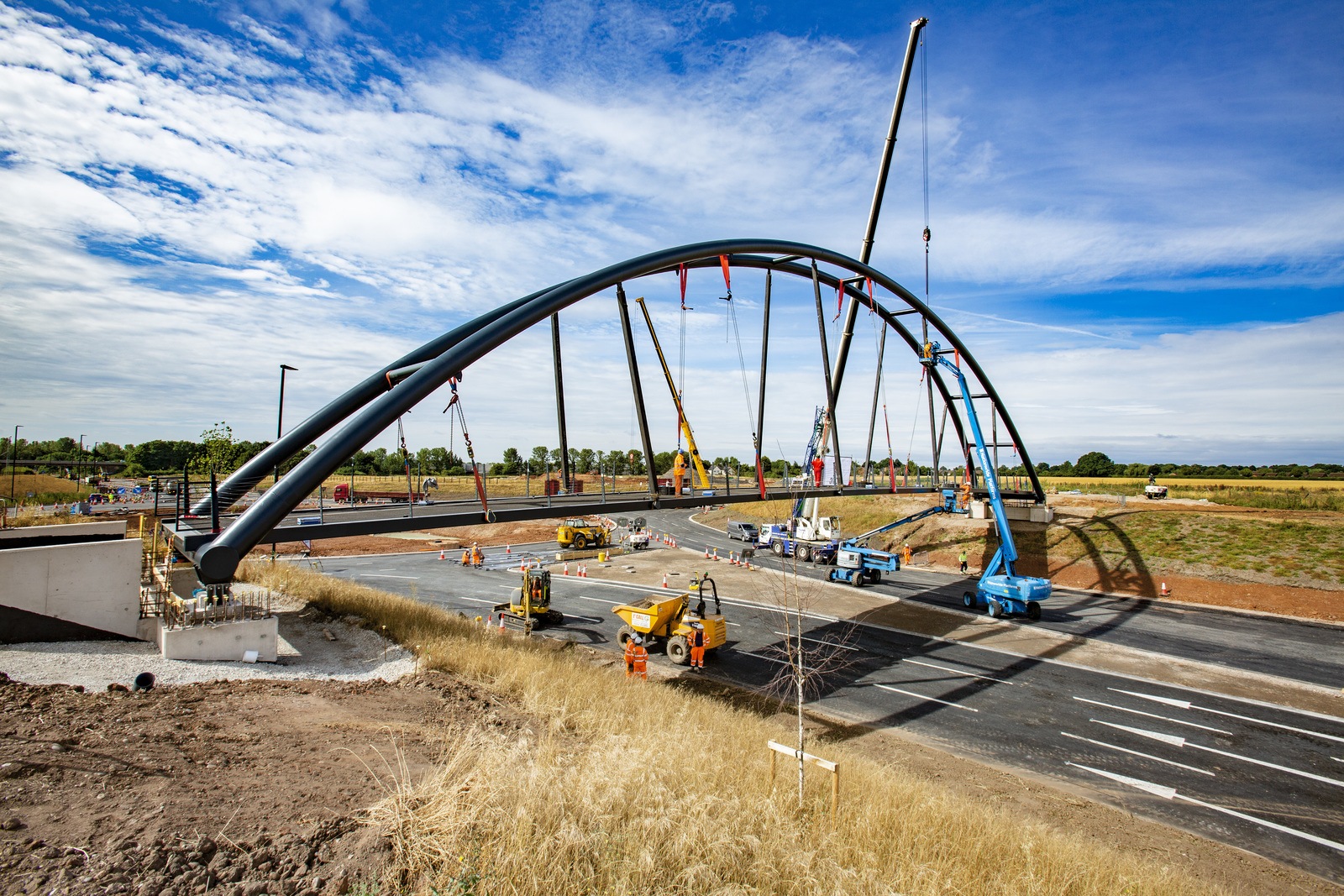 A38 opened 12 hours earlier than scheduled

Between Friday 22 and Sunday 24 July, Winvic Construction Ltd, a leading Main Contractor that specialises in the design and delivery of multi-sector construction and civil engineering projects, erected a new pedestrian bridge over the A38 as part of its Peddimore project, being delivered for IM Properties. 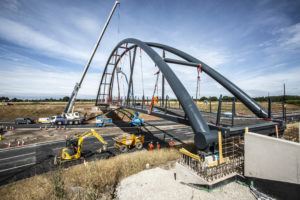 IM Properties is Birmingham City Council’s development partner for the first phase of Peddimore, which comprises all infrastructure works and the development of 37-hectares of the 71-hectare site. The civils and infrastructure project at Minworth, close to Sutton Coldfield, is to enable a major employment park.

The steel tied arch footbridge has a 60-metre span, is 6.5 metres wide and the arch peaks at 20 metres above the highway. It was manufactured off site and then transported to Minworth in three deck sections and three arch sections approximately four weeks ago. It was assembled in an off-line area adjacent to the new 75 metre diameter roundabout that Winvic has also been constructing as part of the scheme.

The roundabout and bridge can be seen on the Peddimore Winvic Live feed and a video of the weekend installation can be found on Winvic’s YouTube.

On the morning of Friday 22, the Winvic team tandem lifted the 90-tonne structure with two mobile cranes – one 330-tonne and one 220 tonne – on to six Self-Propelled Modular Transporters (SPMT). Traffic management was put in place from 6pm that evening and at 8pm when the road was closed to traffic the installation could begin. The SPMTs were controlled remotely, moving the structure into place on to the concrete abutments and temporary jacks by midnight, and through the night the structure’s bearings were secured and grouted. The temporary compressive struts and hangers were removed in sequence throughout the day on Saturday. Between 4pm and 4am on Sunday 24 July, 18 permanent, stainless-steel finish Total Macalloy Struts were individually torqued and tensioned to a predetermined load before being fine-tuned.

The footbridge installation programme was planned meticulously by Winvic, not least because further works to the bridge could be undertaken until 10 August, due to a three-week embargo on road closures for the Commonwealth Games, being held in Birmingham. With completion of the Peddimore infrastructure project scheduled for summer, any postponement with the bridge would delay handover. The timescales also meant that no lead-time could be lost, but the UK’s record-temperatures also presented challenging conditions for operatives. Therefore, the site team made the decision to begin work at 5am each day so activities could still be carried to programme out before temperatures increased in the afternoons.

The Winvic team completed the works ahead of schedule and the road was re-opened 12 hours earlier than expected, at 5.30pm on Sunday 24 July.

This week, Winvic will begin the construction of a permanent footpath, east of the bridge, to the Peddimore site as well as a temporary footpath on the west side of the bridge, which will meet with Walmley Ash Lane. The bridge and pathways will give residents pedestrian access over the A38 into Minworth and forms part of the green travel planning for the scheme. The other focus areas during the final five weeks of the scheme are installing access steps, handrailing, cabling and lighting, undertaking a secondary reinforced concrete cast to the bridge abutments, backfilling the abutments and approach ramps and completing the drainage and ducting connections.

Rob Cook, Winvic’s Director of Civils and Infrastructure, commented: “Our scenario planning, programme management, health and safety preparations and liaison with Birmingham City Council have led to a very successful weekend at IM Properties Peddimore project. Every step of the footbridge installation – from lifting it on to the SPMTs to putting it in place over the highway to fitting the struts – went to plan; in fact, so well, we were able to open the A38 twelve hours earlier than scheduled. It was a true team effort and numerous specialist subcontractors proved themselves to be leaders in their fields.

“There was no room in error with the timings, or our upcoming a 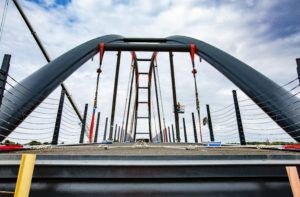 greed handover date to IM Properties could not be met due to the embargo on road closures during the Commonwealth Games. The soaring temperatures certainly didn’t help in the run-up and I’d like to give special thanks to the whole Peddimore team who went above and beyond, starting work extra early so tasks could be completed before temperatures increased in the afternoon. With the bridge in place, we’re on track for handover towards the end of summer.”

Andy Reynolds, Project Director for IM Properties added: “Winvic Construction Ltd, is a trusted partner in our supply chain and having worked with them across a number of our schemes, they have continually demonstrated their commitment to meeting deadlines and ensuring a partnership approach is taken when liaising with key stakeholders and the local community to work considerately and minimise disruption.

“The success of the bridge works is testament to the professionalism and determination of the whole team to plan and execute a complex and time critical operation of this nature. Working in difficult conditions, they really excelled themselves and they have once again underlined why we selected them to deliver one of the UK’s largest manufacturing and logistics schemes.”

Winvic praised a number of specialist subcontractors that worked as one team with Winvic to successfully deliver the bridge works, including Carver Engineering Services, Mammoet, USL Ekspan and Rubix.