The final student from our Year In Industry cohort to share her experience with us is Ammara, a trainee site engineer who is studying for a BEng Civil Engineering (Hons) degree at Nottingham Trent University. Every year we catch up with our trainees – click here to find a wide range of written and video blogs, including Ammara’s five 2020/21 colleagues – to learn about their career journeys and aspirations, because we’re repeatedly told how helpful they are to young people starting out in the industry. As with many of the other stories, Ammara’s time on site has been transformative and she’s looking forward to finishing her classroom studies and putting her new knowledge into practice. 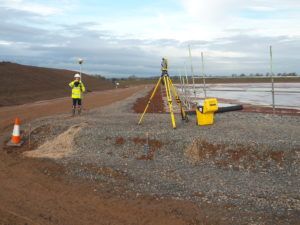 “I have always been interested in architecture but gradually through my A-levels when I was considering my degree, I realised I was drawn to how things were constructed and how the materials needed to be used, rather than purely the aesthetic design aspect. Also, I like to be outside, so from studying maths, physics, and government and politics at college I chose to focus on civil engineering. I really enjoyed learning about the technical aspects, from mechanics through to structural analysis, but I was pleased that design principles were also significant within various modules. The project tasks have covered a wide range of knowledge and in my first year I had to design a coach park. It had to hold two coaches, have cycle racks, paths and a shelter and I had to consider all of the operational and practical parts, such as boundary walls, drainage and the costs. Through my two years at uni I managed to speak to different third year students about their year out placements and I got even more enthusiastic about what was coming up. Everyone said how exciting it was to put what they’d learned in the classroom into practice, and then again putting their on-site knowledge into practice for their dissertation and other third year assignments.

“We had a large careers fair at uni and this is where I first met people from Winvic, and in particular it was really nice to speak to Hollie about her site engineer traineeship that she was undertaking with Winvic at that time. I think Winvic was the only company to take along a trainee to the fair so the company stood out as one to apply to, and I was very pleased that I secured a placement. When I started, I got to spend much more time with Hollie on the Prologis Logistics Operations Centre (LOC) in Solihull as I shadowed her for two days. The structure was up and the cladding installation had started, and I remember thinking how impressive the building was. I’m very grateful to Hollie as she helped to ease me into the role and reassured me. I was a bit worried about the experience, having only worked part time before, and I felt comfortable asking her questions if I felt too nervous to ask an experienced member of staff. It feels a bit silly to say this now because I’ve learned there’s nothing to be frightened of and there isn’t a single person who doesn’t genuinely want to help me progress. Being a woman in a male dominated industry was also a bit nerve-wracking and I wondered if I might not be taken seriously, but again, just watching Hollie get on with the job and confidently command her role, I soon realised gender doesn’t come into it.

“I also spent some time with Gary and Jackie from the health and safety department who took me round different sites, showed me things that were being done correctly, explained the knock on effects if something was done wrong and gave me a full overview of Winvic’s ‘Doing It Right’ approach and commitments. I got to see the Prologis DIRFT III project early on too, and this was my first taste of seeing a vast earthworks programme, but when I moved to work on the IM Properties Mercia Park civils and infrastructure scheme permanently I couldn’t believe how huge the site was at 238-acres! Here I started to shadow Dave who is a site engineer, and I helped on the groundworks, levels for manholes and the storm and foul drains. As the weeks went on, I started to feel more confident and I’ve been given more responsibilities across many areas, like the substations, kerbs, footpaths, cycleways, roads, roundabouts, water mains and ducts for other services. For example, in setting out the footpaths I would use my equipment to measure the required width from the kerb that has been installed, spray the areas, check the levels and use tape to mark where the edging should be laid to. I then work closely with the subcontractors to examine the finish. It’s felt really amazing that the team trusts me to carry out tasks independently and I think I’ve learned much faster this way.

“The Mercia Park civils and infrastructure works are very nearly complete so I’m going to be moving on shortly, but also that means I’m staying exactly where I am! An industrial warehouse project is being brought forward here, so I’m looking forward to learning about a whole other sector and seeing the large steel-framed buildings being constructed. I’ve also had the chance to meet with lots of people doing different jobs like planners, quantity surveyors and all sorts of specialist subcontractors, plus I will soon get to spend a week or two with the design team. By the end of my placement with Winvic I will have gained a holistic view and understanding of projects, and I’m looking forward to taking this understanding back to uni with me. My mentor, Dan, who is a senior engineer has been so supportive, the whole team are always happy to explain things in detail to me and everything makes much more sense after being hands on. I’m very thankful for the opportunity and I’d thoroughly recommend Winvic for a year out placement to anyone.”